The parlour was once the cultural heart and soul of the colonial home, a place for families and their guests to gather, entertain and socialise, as well as a place to retreat in private solace. More so, it was a woman's realm: what historian Therese Radic calls “a place of preserved memories, pianos, afternoon tea, tedium, respectability, and the vicar.”1 A woman tuned and practised the social mores of her family in this room, in that authoritative presence of a piano—lending its power and also its charm to her act.

Pianos and parlours have had a long association in Britain. Even in the antipodes, where the two are relatively recent arrivals on the landscape, they share a common heritage. We know that the first piano arrived with the first fleet in 1788, on the ship Sirius. It belonged to the surgeon, George Wogan. Jon Rose reports that by the end of the nineteenth century, the import of pianos had grown “from a nervous trickle to a barely controllable flood,”2 albeit overlooking the fine instruments that were already being made at home. Based on credible statistics, Rose suggests that as many as three out of four Australians may have owned a piano by the end of the nineteenth century. But how did the parlours, pianos and their players, exiles and emigrants of Britain and Europe, translate to the Queensland bush?

The arrival of free settlers, when the town of Brisbane became a municipality in 1859, also saw the arrival of the piano in the north; and as towns spread further northwards and westwards over hill and dale, their iron frames weighed heavily on the bullocks’ drays or camels’ backs. An eerie reminder of the piano’s early presence in regional Queensland is the “Piano in the tree” in Capricorn Street, Clermont. It is also a reminder of the height and ravaging force of the flood waters that ripped through the town in 1916. Although the piano is a replica today, the Issac Regional Council reports that there were originally three pianos found in trees after the 1916 flood. Clermont itself may provide the original ‘key’ to journeys of pianos and their destinations in the Queensland bush. Established in 1862, the town was the first inland settlement in the tropics and is one of the most historic town centres in Northern Australia. 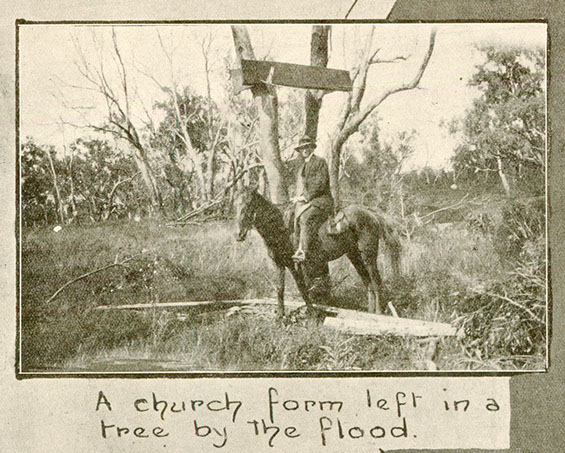 With floods a feature of our new century, 100 years from the “Piano in the tree,” it’s timely to re-imagine the extraordinary music-making that happened in the most extraordinary places, well outside the formal surrounds of Brisbane society. Digging into archives and family albums, we see photos of handsome parlours—the family’s face to the world—in early Queensland homesteads, with ladies holding court at a piano. Yellowing keys, weathering timbers, and unmelodious tones aside, the piano and its home, the parlour, were a woman’s sentimental attachment to a world left behind, and a haven from the grind of living every day in the bush.

The stories of Queensland’s many musical lives nurtured in this way are yet to be told—fascinating stories about women, men and music-making in remote places, in punctilious parlours. What undiscovered imprints are left by those remote music-makers on the growing sense of identity and place in a state bristling with emigrants brandishing weapons against its native inhabitants and bustling with gold fever?

Pioneers, parlours and pianos:
Making music, building a state in the Queensland bush.

back to the home page